COVID-19 and the legal system. Your questions answered.

Can you move — with or without your children?

There are certain rules you have to follow if:

A move that would significantly affect the children’s relationship with the other person is called a relocation. This usually means moving a long distance: to another country, another province, or another city within BC. A relocation usually makes it difficult or impossible to follow existing parenting arrangements.

A move in the same neighbourhood or in the same city that doesn’t significantly affect the child’s relationship with the other person probably isn’t a relocation.

Before you act on your plan to move

Whether you’re planning a short-distance move or a long-distance relocation, and whether you have an order or agreement or not, it’s a good idea to talk about your plans with any other people who have guardianship, parenting time, decision-making responsibility, or contact with the children.

Talking to these people might be hard for you, but doing this first can make things easier later. You might be able to work out new arrangements for parenting time or contact without having to go to court. And staying out of court will save you time, money, and stress.

The other people in your child’s life need to know your new address and contact information (such as your phone number), so they know where the child lives, where to pick up and drop off the child, and how to contact you.

You can ask a lawyer if they think a court would let you move. You can also use a mediator to help you and the other person sort out new parenting arrangements or a new contact schedule.

If you have an order or agreement

Give written notice of your plan to move

If your move is a relocation

You have to give written notice about your plan to move if it will significantly affect your children’s relationship with others.

If you have decision-making responsibility or parenting time under the Divorce Act, you can give notice using the Notice of Relocation form.

You must give written notice at least 60 days before your move date. Your notice has to include:

If your parenting order was made under the Divorce Act, your written notice also has to include:

You have to do this whether you plan to:

You can ask the court to excuse you from giving notice if it would put you at risk of family violence.
Under the BC Family Law Act, you can also ask for an exception if the other guardians or people with contact don't have an ongoing relationship with the children (that means they don’t see the children regularly and there's no real connection or love between them).

If your move is not a relocation

In your notice, you must let the other person(s) know:

If your parenting order was made under the Divorce Act, you have to give written notice even if your move isn’t a relocation and won’t significantly affect your children’s relationship with any of those people. You should given this notice as soon as possible.

Keep trying to work out an agreement

If the other person doesn't want you to move, the law says you must try hard to work something out. Out-of-court family dispute resolution processes such as negotiation and mediation can help you sort out new parenting arrangements or a new contact schedule.

If you can't work something out, the other person can object within 30 days by filing an application with the court.

Under the Divorce Act, the other person can choose to give you written notice of their objection by serving you with an Objection to Relocation form instead of filing a court application.

Who can object to your move

Under the Divorce Act, if you’re relocating without your children, you have to provide 60 days' written notice, but no one can object to your move.

If no one objects to the move

If no one objects within 30 days, and there aren’t any court orders stopping you from relocating, you can move as planned.

If someone objects to the move

If the other person objects to your move, the court has to decide whether to allow the move. The court looks at the child's best interests when deciding whether a child can relocate. The court considers many factors, including:

If you have to go to court about a relocation, it’s important to get help from a lawyer.

Who has to prove their case to the court

The person who has to prove to the court that a move is or isn't in the child's best interests depends on the current parenting arrangements.

The court can’t consider whether you would still move even if the children aren't allowed to move with you.

If you move without giving notice

If you have a parenting order and you move without giving notice, you could be in serious trouble. For example, you could have to pay a fine or even be sent to jail.

If you move without giving notice, the other person can say you wrongfully denied them parenting time (you didn't follow the court order or agreement that says when they can see the children). They can apply to change the parenting order or to set aside (cancel) the parenting agreement and ask for a new order that says, for example, that the children must come back and live mostly with them.

To find out more about what a judge can do if this happens, see What happens if you don't follow a parenting agreement or order?

If you don't have an order or agreement

If you don't have a parenting order or agreement and you want to move, and the other person doesn’t want you to move, try to work something out. Out-of-court family dispute resolution processes such as negotiation and mediation can help you sort out parenting arrangements or a contact schedule.

If you can't agree about the move, one of you can apply to the court to get a court order that deals with parenting arrangements.

Going court takes time and money. And it's stressful. Try to work something out between you so you don't need to go to court.
If you do have to go to court about a relocation, it’s important to get help from a lawyer.
If you go to court for a parenting order, the court will look at the children's best interests. If the move would affect the children's time with other important people in their lives, the court has to think carefully about why you want to move.

The court can’t consider whether you would still move even if the children aren't allowed to move with you.

If you decide to move even though the other person doesn't want you to, it could work against your case if either of you later applies for parenting orders.

You could also be charged with a crime if there's evidence that you abducted (kidnapped) the child. To find out more about international child abduction, see the Child abduction and custody issues page on the Government of Canada website.

If the other person thinks you're about to take the child out of BC and not come back, they can apply for a court order to stop you. If they show the court enough proof, the court can order you to:

The court can also order you not to take the child out of a certain area.

A mother learns how and why she can move with her son to another city in our short illustrated story, Can I move my family? 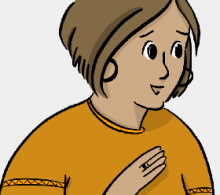